An Autistic Little Boy Visits An Animal Shelter: What Happens Next Will Melt Your Heart

A California dog rescue shelter found an unexpected helper in a young volunteer. 6-year-old Jacob suffers from autism, and has found it difficult to interact with other kids his own age. The solution? Make some furry friends who are in dire need of company!

For over a year, Jacob has been visiting the Carson Animal Shelter in Gardena, California. Every Thursday — known among workers at Carson Shelter as “Therapy Thursday” — Jacob arrives with a book and a mat in tow. He lays out his mat in front of a cage, plops down, and begins to read to the homeless animals.

Jacob told NBC4 News, "If I read to the dogs, they will come out of their cages and find homes.They have to find new homes because they are alone."

Jacob has a calming effect on the dogs, who sit quietly and wag their tails as he reads them stories. In turn, spending time at the shelter has helped Jacob overcome his issues with loud noises, which can be extremely distressing for those diagnosed with autism. 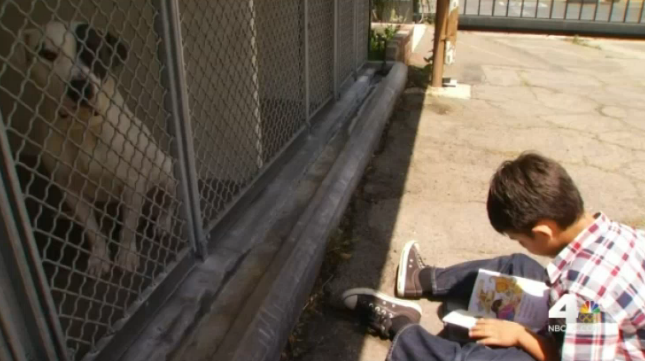 "I think it helps socialize the dogs with children, and at the same time helped Jake socialize with animals more," said Jacob’s aunt, Lisa Ferranti, who also volunteers at the animal shelter.

Not only is spending time with his canine chums helping the animals relax, but Jacob’s parents have reported that his reading level has risen to a third-grade level after spending so much time reading aloud to his pals.

If you live in the Orange County area, the Carson Animal Shelter is at full capacity, according to their Facebook page. If you have room for a dog in need, swing by and adopt!

The 200 Best Dog Names For Your Precious Snuggle-Butt

Did You Know That These Common Indoor Plants Are Poisonous For Pets?

10 Ways To Use Coconut Oil For Dogs: This Superfood Is Not Just For Hoomans!