Can Dogs Eat Cheerios, Or Is This Balanced Breakfast Off-Limits For Fido?

Although there hasn’t been an official study, it might be safe to say that more Cheerios end up on the floor than in mouths — at least when kids are involved. And like a furry, sentient Roomba, nobody loves vacuuming the floor more than the dog!

But can dogs eat Cheerios? What about other popular breakfast cereals?

Yes, dogs can eat Cheerios as long as they’re original or Honey Nut Cheerios. Double-check with your vet and use common sense: don’t replace your dog’s meals with a bowl of cereal every day! But should your dog suck up some fallen Cheerios, they aren’t likely to cause any harm. Too many may cause an upset stomach, so keep it to an occasional treat!

Although Honey Nut and original Cheerios are a safe snack for Pooches, not all Cheerios are safe. Chocolate Cheerios are dangerous to doggo; after all, chocolate is the most lethal pet poison. Other Cheerios, like Yogurt Burst and Cinnamon Cheerios, are best avoided as well. The additional ingredients and sugar can be harmful to your dog.

Dogs shouldn’t eat Lucky Charms. We hate to break it to ya, but Lucky Charms are basically junk food! Stuffed with sugar, additives, and other nasty ingredients, the average bowl of Lucky Charms contains 10 grams of sugar per serving size.. That’s over three cubes of sugar! This isn’t great for humans, but it’s even worse for dogs. If you spill Lucky Charms, sweep them up before your dog eats them.

Raisin Bran is toxic to dogs because dogs can’t eat grapes or raisins. Signs of raisin poisoning in dogs include: 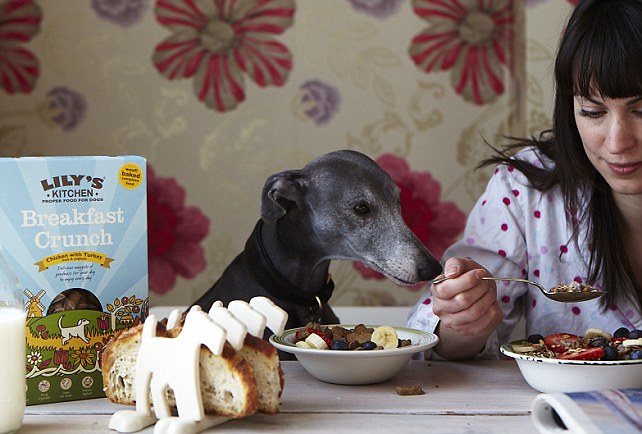 Dry cornflakes are okay, in moderation, for your dog to eat. Like all of the cereals featured on this list, it’s not a good idea to switch up your store-bought dog treats and dog food for human foods. Your dog needs a totally different diet than you do; a bowl of cornflakes isn’t going to give Fido the nutrition that he needs.

Dogs need a lot of protein, and cornflakes are all carbs. While eating the odd handful of cornflakes isn’t likely to cause major problems, it’s best to keep your dog snacking on pup-approved meals designed for dogs. Some dogs have allergies to corn, and lactose intolerance is common in dogs. If your dog laps up a bowl of cornflakes and starts to display signs of sickness, seek medical attention at once.

Always double check the ingredients. Xylitol is sometimes used as a sweetener, and it is absolutely lethal to dogs.

There are only a few cereals that pose a serious threat to your pet if eaten. Watch out for the following ingredients that should set off serious alarm bells:

Because of the unhealthy ingredients commonly found in breakfast cereals, it’s best to avoid them if you’re looking for a replacement snack!

And remember, all dogs are different. Your dog may have an allergic reaction, so if they snack on cereal for the first time, keep an eye on them and call your vet if you see anything out of the ordinary.

How Many Teeth Does An Adult Dog Have? Spoiler: It’s More Than You Think!

The 200 Best Dog Names For Your Precious Snuggle-Butt