Why Police Dogs Are Some Of The Toughest Doggos Ever

It started as a routine check of a self-storage facility — but Breston, a Belgian Malinois police dog, smelled something funky. Breston directed his handler to a closed storage garage. Inside, investigators discovered approximately 1,500 pounds of marijuana, worth around $3,400,000.

This was no ordinary bust. Breston’s sensitive nose sniffed the marijuana through heat-sealed Mylar bags that were stuffed into plastic-lined, foam-sealed crates inside of a closed garage!

From sniffing out drugs to tracking down criminals, police dogs (also known as K-9s) are some of the toughest doggos ever, and we’re grateful for all of their hard work. But you won’t believe the gruelling training gauntlet these pups endure to get the gig. Here, we’ll take a look at police dog breeds, police dog training, and where those pups rest their weary heads after a long day at work!

You wouldn’t train your Chihuahua to be a guard dog — while they’re fierce in their own way, Chihuahuas don’t have the strength to keep criminals at bay. Certain dog breeds are better predisposed to police duty than others. You’ve probably seen German Shepherd Dogs and Belgian Malinois on patrol before, but did you know that other breeds are used in police duty, too?

One thing is essential among all police dogs: sensitive sniffers! A dog’s sense of smell is almost 50 times more sensitive than a human’s, which means they can distinguish scents that people can’t. That trait matters when police need to save time and maximize safety. A dog can scope an area in a fraction of the time it would take a human, and they can identify dangerous materials (like drugs and bombs) at a distance that is safe for themselves and their handlers.

Related: Belgian Malinois vs. German Shepherd: Can You Tell Them Apart?

Many police dog breeds are bred in Europe, where breeding standards are traditionally stricter. European dog agencies are internationally renowned, putting their pups through rigorous training before they ever set a paw in the US.

Remember Breston, the dog who sniffed out those drugs in a storage unit? He’s from Holland, and his handler, Officer Dan Smith, uses Dutch commands because that’s how Breston was trained as a pup! 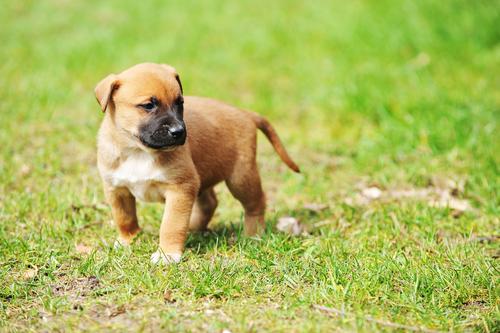 Police dogs receive an extensive amount of intense training so they’re prepared for the scenarios they’ll face on the job. All police dogs are experts in obedience, endurance, and agility training. They’re trained as puppies to remain focused on their duties around people.

Depending on their jobs, a K-9 will receive specialty training so they can search for drugs, evidence, or missing persons. At the Glendale Police Department in California, all police dogs attend initial patrol training, which takes several weeks. Then, they receive ongoing training with their handlers.

“Once a week, we dedicate the entire day to training, which includes narcotics and explosive training, suspect apprehension, and obedience,” according to the department’s FAQ page.

As you can imagine, all that training and active duty can be exhausting for our four-legged friends! At the end of a long day, police dogs go home with their handlers, where they become family dogs. Off-duty, these pups rest, relax, and become a part of the handler’s family.

Most police dogs work for five to seven years. When they retire, they enjoy their golden years living at home with their handler.

Do Police Dogs Get Paid?

While police dogs have important jobs, they don’t get wages. Instead, they’re “paid” in other ways. They receive a loving home, food, and medical care — but most importantly of all, they benefit from constructive outlets to work and train.

Most police dog breeds are part of the working group: they’re highly active and intelligent, and they need to learn and perform tasks to stay happy. The German Shepherd is a prime example of this need. Without plenty of exercise and mental stimulation, GSDs can become anxious and depressed — but through police work, they exercise, learn new skills, and receive praise from their handlers throughout their workday. It’s a pretty sweet gig!

Just like their heroic profession, police dog names tend to be dignified and noble. You probably won’t meet any K-9s called Taco!

Do you think your dog would be a great K-9? Tell us about your pup in the comments below!

The Cavachon: The Friendliest Dog Breed In The World?

Funny Dog Tweets That Will Evaporate Your Bad Mood