When my boyfriend’s dog met my family’s dog for the first time, I was an anxious mess. My family’s dog is an overweight-and-affable Chihuahua mix named Dexter, and he was meeting Martha, a much larger Australian Cattle Dog mix with an attitude as big as her appetite. I needed my family to dogsit Martha relatively soon, so I knew she and Dexter had to start their relationship off on the right paw — and that required some planning.

If you’re wondering how to introduce dogs for the first time, it’s likely that you, too, are an anxious mess. Here’s a quick and dirty guide to introducing dogs at home based on what worked for us and what Martha’s trainer recommended.

How To Introduce Dogs: Meet On Neutral Territory 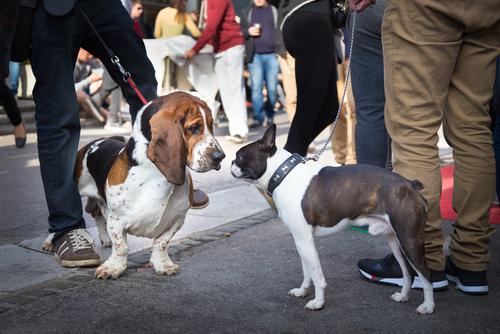 Before you embark on the journey of taking your fluff-butt out into the world to meet other dogs, consider two things: your dog’s social level and favorite treats.

Related: The complete guide to picking the right dog for your lifestyle.

Is your dog super submissive, or are they super dominant? Do they respond to your commands well, or do they march to the beat of their own drum? Did they get plenty of socialization with other dogs as a puppy, or will this be the first time they’ve ever met another dog? None of these traits are necessarily deal breakers, but they’re factors to heavily consider as you work on introducing dogs to each other. If you’re the fur-parent of a dominant, unsocialized dog, you’re going to want to proceed slowly and with a pocket full of hot dogs (Martha’s favorite treat).

As a good rule of thumb, one of the easiest ways to make your first introductions is to go on a walk together, especially in an area neither dog has visited or marked before. That’ll give your pups plenty of time to get used to each other’s smells, and it’ll provide a safer area for you to gauge their reactions. 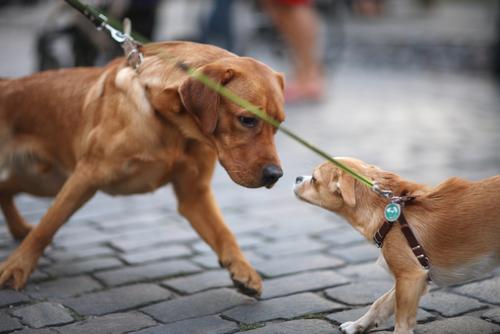 Related: Why do Chihuahuas shake?

On your first dog walk, keep the pups at least 10 feet away from each other. According to the Animal Humane Society, this distance will prevent the dogs from greeting each other or staring, and will instead allow them to acclimate to each other’s presence. Reward the dogs with treats as they notice each other — you want their initial interactions to always end on a positive note, and for dogs, that usually means treats.

After a successful first meeting, allow your dogs to interact with each other for short periods of time, whether that’s a short sniff along a walk or a quick greeting with both dogs on loose leashes. End each positive interaction with treats. If things go south, never use violent actions or aggressive language, which will just stress both dogs out even more. Simply redirect your dog’s attention with treats and direct them away from the other dog.

How To Introduce Dogs To Each Other, Courtesy Of A Dog Trainer 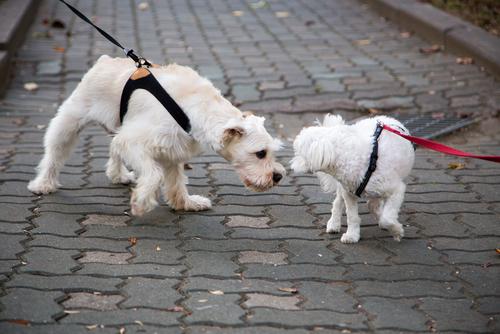 I worked with Beth Jeffery, a dog trainer and animal behaviorist based in San Diego, to learn basic obedience and socialization techniques for sassy-but-sweet Martha. When we encountered other dogs on our walks, Jeffery told me to walk so that I stood between the dog and Martha. They were allowed a quick sniff, followed by a reward (hot dog pieces).

If your dog is notoriously dominant, this strategy also works well for longer introductions. I walked with Martha on one side of the sidewalk while my mom walked with Dexter from the other direction. Martha was instantly curious when she saw Dexter, so I gave her a quick piece of hot dog to remind her of the rewards of good behavior. They sniffed each other, and then we kept walking. We repeated that process several more times before we let them walk next to each other around the block.

In this case, we were comfortable walking Martha and Dexter next to each other because they were relaxed and didn’t really care about each other’s presence when they met. But how do you know when first introductions are going well?

How To Introduce A New Dog: What To Watch For

Dexter and Martha size comparison. Their sass levels are about the same. #dogsofinstagram #dogwalk

In the end, Martha and Dexter became buddies, and the usually antisocial Martha gets to enjoy spending time with another dog. My sister recently adopted a Dachshund, so we’ll have to go through the introduction process again — but this time, I’ll be ready with Martha, Dexter, and a pocket full of hot dogs.

What introduction techniques work best for your dogs? Let us know in the comments below!

How To Speak Dog: Body Language And Beyond

Rhodesian Ridgebacks Doing Yoga Is Your Moment Of Zen

How To Prevent Hot Car Deaths In Dogs